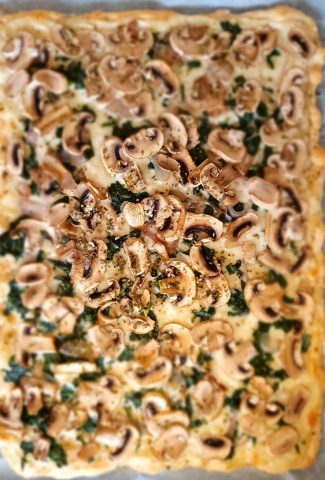 Are you ready to create an easy vegan gourmet pizza? Honestly, I had never made a vegan white sauce pizza before and was seriously surprised by how deliciously tasty it turned out on the first try. Lucky for you, I wrote it all down, so you can make this easy vegan spinach and mushroom pizza with white garlic sauce too!

The first thing you need to consider before making this vegan white sauce pizza is if you want to make the dough yourself or if you want to get a premade vegan pizza dough from scratch.

If you go for making it yourself (and if you have the time you should!), I have written down an easy vegan pizza dough recipe that I have used for years. It’s actually been sitting on the first page of my handwritten cookbook that I was given more than 20 years ago (Now, THAT made me sound old!). So there is no way I know where I got it from. But it’s easy to make and never fails! That’s why I thought it’s perfect to share with you.

Start with making the dough and while it’s raising you have time to prepare the vegan white pizza sauce and the toppings so they are ready to go once the pizza dough is ready to strech.

Other than cutting the vegetables, I also cut and heated up the spinach before I added it to the pizza. Just enough for it to become damp. The reason I wanted to do so is that they are easier to spread on the pizza together with other ingredients when they’re moist. While fresh, they make a thick insecure layer for the mushrooms to wobble on top of. It’s just more pleasant to add the toppings and I think they turn out better at the end, but that’s just me.

Now, let’s check out the recipe for this heavenly easy vegan spinach and mushroom pizza with white garlic sauce! 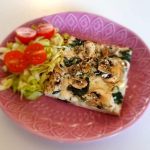 Are you ready to prepare an easy homemade gourmet pizza? I had never made a white sauce pizza before when I threw this together and it turned out so incredibly good that I couldn't resist sharing the recipe with you!
Prep Time1 hr
Cook Time20 mins
Total Time1 hr 20 mins
Servings: 4

I love to eat my pizza by itself with my feet on the table and the plate on my lap watching a movie on tv. However, the vegan spinach and mushroom pizza with white garlic sauce is quite heavy and is perfect with something fresh on the side.

A side salad garnished with olive oil, salt and lemon is simple and refreshing, or you could make lemon garlic asparagus on the side.

For a complete Italian evening, why not make cherry tomato bruschetta as an appetizer and accompany with a nice red wine?

Pin it for later! 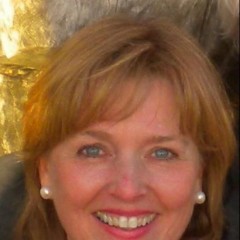 I'm JJ and I love sharing delicious plant-based vegan recipes and lifestyle tips for anyone who is cooking for 1-2 people. Welcome to my site!

Easy Way to Vegan is a participant in the Amazon Services LLC Associate program, which is an affiliate advertising program.  This program allows me to earn fees by linking to Amazon.com and affiliated sites, and does not cost you a cent! Thank you for reading my content and clicking the links.